skip to main | skip to sidebar

Collimation of a Schmidt-Cassegrain telescope (SCT) is no simple task... good news is, doesn't need to be done too often. ;-)

One thing I struggle with continually in my infrequent collimation attempts is understanding the direction that I need to adjust in order to make the correct movements of the secondary mirror.
Articles on SCT collimation say to look into your eyepiece and reach around the front of your telescope putting your index finger near the front of your telescope pointing towards the center. While a great (and easy) thing to describe, this is a very difficult thing to do, especially if your telescope is wedge mounted.
The distance from your eyepiece to the front of a wedge mounted telescope (alt-az is much easier as it is a shorter distance) is pretty far making it pretty much out of reach unless you have some pretty long arms. ;-)

So thinking about this more, I wondered what I could do to mimic the pointing characteristics needed during collimation, without reaching around to the front of the scope with my hand.
Here were the characteristics I considered:
- stability (it needed to stay put in one place until I removed it)
- mobility (it needed be able to be put on and removed as necessary)
- size and weight matters (needed to be something I could put in pocket or toolkit)
it also needed to reasonably perform the function necessary, meaning that it should obstruct enough light to mimic a finger but not enough that it takes away from the collimation efforts. 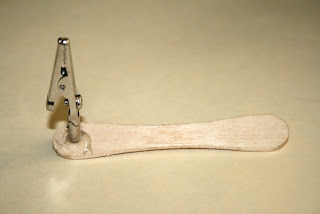 Now, when I use the 'collimation helper'
Posted by Ken Durazzo at 5:39 PM

Ken Durazzo
The views expressed on this blog are mine and do not necessarily reflect the views of my employer.