skip to main | skip to sidebar

I have always been interested in viewing the sun, even with my first telescope I had filters that allowed me to see sunspots, but there is so much more to see with the sun. So, I recently purchased a Coronado SolarMax II 90 from OpticsPlanet.
The scope came with a nice case, several eyepieces, a barlow and a clamshell mount with a solranger spotter. What wasn't apparent at the time of purchase was how it would mount to my CGEM, there was no mention of anything outside of the clamshell mount. 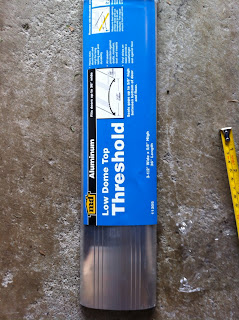 I measured the maximum width the CGEM mount would accomodate and decided that 3 inches would be about the right size for the width of the mount plate, to ensure that the mount head screws were firmly seated in the mount, you wouldn't want them to pop out or strip while your scope is mounted. ;-)

Next I cut and removed burs from the mount plate: 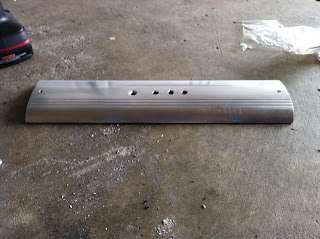 As you can see above, I also drilled out two small holes at each end to hold knobs used to secure the plate from accidental slippage off the CGEM mount head. You can also notice three holes I drilled to mount to the provided SolarMax clamshell. 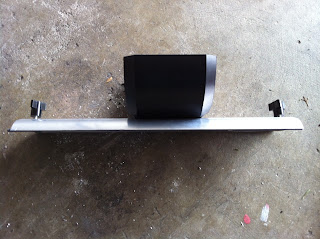 Above is a side shot of the bottom half of the clamshell mounted on the new mounting plate and I inserted the safety knobs as well. Note: the safety knobs were installed on the bottom of the mount in the final procedure, this makes them act as a safety catch in case the mount slips from the CGEM mount head, keeping your scope off the pavement.

I painted the new mount plate a semi-gloss black to kind of match the CGEM as well as the black parts of the scope. In the image below you can see it mounted to the CGEM and scope mounted on it. You can also see the placement of the knobs and see how they might be helpful if the mount starts to slip from the mount head. 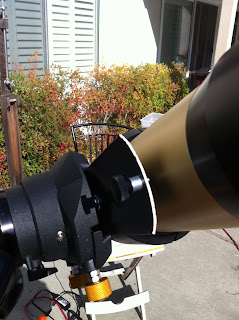 The image below shows the mount and scope as it is tracking the sun. 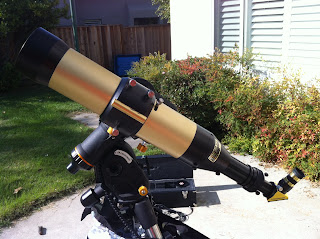 Here is a link to my first light video I got from the setup:
http://www.youtube.com/watch?v=MPKJ_DzhsVE

I used an Orion Starshoot Planetary imager for this image, I will be creating a way to mount my other cameras that should provide a greater level of detail than the 640p image provided in this imager. I found that the level of detail provided in the video is about 100x less than what you are able to see visually. If you have never looked through one of these scopes... it will take your breath away.

As a final note: I was initially somewhat concerned about the stability of the choice of materials, but after hours of visual use, tracking for 3 hours and my first video, I believe the mount plate will prove to be a very acceptable part of this setup and at about 6x less cost than a mass produced mount plate.

Ken Durazzo
The views expressed on this blog are mine and do not necessarily reflect the views of my employer.